Performers, patrons of the arts find a home in Elgin

Nestled alongside the Wallowa Mountains sits Elgin, Oregon, a small Eastern Oregon community home to just under 2,000 people that also boasts a booming artistic community. At the center of this community is the Elgin Opera House, supported by funds from the Oregon Cultural Trust.

Built in 1912 to house the Vaudeville style of theater, Elgin Opera House was the backdrop for some of the most exciting acts of its time while also housing the town’s local government offices. Vaudeville theaters were traditionally small establishments intent on giving audience members a more intimate view of productions, which was made by smaller theaters with an up-close view of the performers. The Elgin Opera House operated in this fashion until the mid-twentieth century when it was converted into a movie theater. In 2006, current Executive Art Director Terry Hale took over with a new vision for the future.

Hale, who moved from the Portland area to Elgin 16 years ago, was first introduced to the Opera House when taking a historic tour. He says that he was ‘astounded’ at the potential the Opera 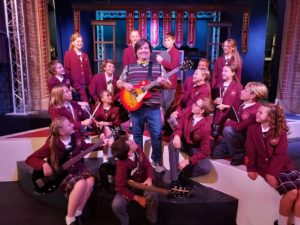 The case of “School of Rock” (Courtesy: Elgin Opera House)

House had and began to work with the community towards complete revitalization.  With an extensive background in the arts, as well as a career in marketing, Hale seized the opportunity to turn the Elgin Opera House back into a functioning home for performers and theater lovers alike. What started out as a small side endeavor, turned into a life altering passion project.

Hale started by partnering with local theater companies that used the Elgin Opera house as a performance space. Eventually he realized the only way to reach his dreams of this theater fully coming to life was to go big—so he launched a production of “Beauty and the Beast.”

There was pushback from the local community, who encouraged Hale to take smaller steps, but Hale knew better.

“I said, we can’t do that,” said Hale. “That model doesn’t work. We’ve got to see whether people are going to support us out here. I did an audition and we had over 100 people audition for the show.”

The best part? Hale unearthed hidden gems in the community. The actor cast for the Beast ended up being a parent who tagged along with their kid at an audition.

“He just blew everybody away,” said Hale. “What I discovered is that there’s hidden talent seeded throughout these communities. These are people who love the arts who now may have moved on to different careers and life milestones, but still love the art form of theater.”

Even with the immense amount of local talent in Elgin, one of the challenges that the Opera House faces is the need to bring in new and diverse talent to not only perform but to assist education within the opera house.

“We were able to bring in people who have different backgrounds and different understandings of life and world views. It’s important for artists to be able to mingle and learn from different artists. When we wrote this Oregon Cultural Trust grant, that was the purpose for us—to be able to bring artists in to work with our team and our kids so that they could get a different perspective.”

Funds from the Oregon Cultural Trust make the community of Elgin a more vibrant place. This past summer, with the help of the Cultural Trust, the Opera House was able to produce their very first Shakespeare festival and bring actors from all over the world.

Since 2006, the Opera House has continued to attract audiences of theater lovers who travel from every corner of the Pacific Northwest to attend these dynamic performances. The Opera House’s next production is Andrew Lloyd Webber’s adaptation of the 2003 film “School of Rock,” which is a loving testimony to the transforming power of music.

For tickets and more information on the Elgin Opera House, click here.

This story was created in partnership with Here is Oregon and Oregonian Media Group. Here is Oregon’s mission is to lift and celebrate Oregon — the people, places, experiences, and diversity of culture and skills that build community and inspire innovation. Follow along @HereisOregon and #SharetheGood.