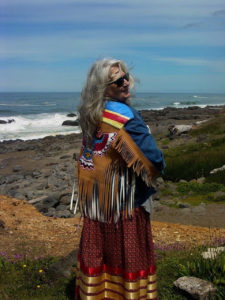 There’s a new crop taking root in the Willamette Valley under the nurturing care of the Elderberry Wisdom Farm near Salem, Oregon. Its leadership is seeding a new generation of filmmakers to tell their story of indigenous culture. Project mentor and filmmaker Katherine “K’iya” Wilson, whose Native American ancestry was hidden from her as a child, puts it this way, “to put cameras in the hands of native youth to film our stories is very powerful.”

Rose High Bear, an Alaskan Athabascan who calls Oregon home, is the founder of the Elderberry Wisdom Farm. It’s a farm of few acres, but it’s much more than a place.  It’s an idea.  To bring back an awareness of indigenous culture and relate it to today’s world, including toiling in the soil and cultivating emerging young minds.” Of these new film producers she says,“ Our youth are the future.”

Reaching beyond working the land, the Elderberry Wisdom Farm is now cultivator of four aspiring indigenous filmmakers who will learn and share the stories of their Native American culture, lore, and more. With the help of a $28,485 grant from the Oregon Cultural Trust, Rose High Bear says of this new crop of documentarians, “They will look into our heritage, learn stories from a thousand years ago, and tell them through film.” K’iya Wilson adds, “Our filmmakers will research our elder’s stories and spread them across their own culture and beyond.” “To work with the Cultural Trust to make this happen,” she says, “is such an honor.”

They’re embarking on this project in the Spring of 2023, to teach the indigenous youth from as diverse cultures as the Klamath Tribes, the Umatilla and others in the art of film making to collect, preserve and communicate the knowledge base of their elders. “We will teach them to use cameras and other film making gear,” says Wilson. “We will get them to tell their stories which will help transform themselves, which is what storytelling does in our indigenous culture, and share our culture with the rest of the world.”

For the novice producers to be grounded in the elementals of film communication, the Elderberry Wisdom Farm has turned to the University of Oregon School of Journalism and Communication, and acclaimed mentor Mitchell Block.  Block, who has won many accolades including films which have been recognized for achievements by the Academy of Motion Picture Arts and Sciences four times, is looking forward to the opportunity to mentor the youth.

Ms. Wilson, herself a graduate of the U of O, found a welcoming environment with both Block and the receptive Native American culture at the U of O. She says, “There is already an amazing infrastructure in place to build our capacity to train students on. The Longhouse, the Native Dorm, Native Student Union and the largest cohort of Native Students ever at the U of O this year. But perhaps most importantly, from the U of O President on down, a compassionate and supportive institution, with professors, and organizations to support us.”

The Elderberry Wisdom Farm is not simply making an investment in film but rather into the aspiring film makers themselves. According to Rose High Bear, the fruits of their labors will new film, and “our youth will envision our future culture.” K’iya Wilson adds, “they’ll gain a greater belief in themselves, and appreciation of their cultural values.”